The Reform Party has been able to reorganize and get these committees functional, however the committees are not fully staffed. Many of the committee members also agreed to take on more than one role temporarily in order to get the party functioning, but have primary positions elsewhere.

The Reform Party of the United States is an all-volunteer organization, and no member draws a wage or salary. For some Committee Positions, volunteers will need to sign Nondisclosure Agreements, especially on the Finance and Records committees.

The following shows a list of our standing committees, the leaders of each committee, and a few examples of roles we need filled.

If you would like to help the Reform Party, and have a skill that is not listed as needed for one of these committees we’d still like to hear from you. The following list is only a general idea of necessities.

Shawn Storm was elected Secretary to fill the term originally started by Nicholas Hensley before he was elected Chairman. Mr. Storm holds a position on the Richland County, Montana planning board and professionally works as a medical administrator.

Emily Price has a history of working as an administrator for small businesses.

The Records and Credentials Committee is made up of 7 members, one member from each region. Before every convention and national committee meeting, the Records and Credentials Committee makes sure that all the state delegates are legally allowed to vote and call roll. They also take possession of the records before the meeting and give the records to successor officers after officer elections.

The Records and Credentials Committee helps the Secretary put together documents, lists and organize the records. They also help on the administrative side of the organization, as well as handle information requests from state organizations.

The Reform Party’s archive is disorganized and many of our various lists need to be modernized. We will need assistance with the following:

This is a good job for anyone with experience as a secretary, working with archives or as a business administrator

Prior to serving as the Reform Party’s Communications Committee, Chair Dale Lehner served for 7 years as the Chairman of Prairie Creek Wisconsin and on several other local boards.

Arguably the most experienced member of the Reform Party leadership, Leigh Pollet started in politics over forty years ago when he was the youngest person elected to the Democratic Party of New York State’s Executive Committee. He has worked across the spectrum with Democrats, Republicans and independents on countless projects and campaigns.

Daniel Dubrue is a small business owner that was a staffer for the Buddy Roemer Campaign in 2012.

The Finance Committee is responsible for helping the communications committee raise money through proper messaging and content, one on one fundraising through various means, creating financial analytic data, and helping the Treasurer with reports.

We are completely rebuilding this committee to do all forms of fundraising and manage an online store.

In addition to this list of national needs, there are needs in every state, county and local party that need attention. Even if these positions are filled nationally, there are many positions elsewhere one can fill. If you’d like to get involved in the Reform Party in any way – even if it isn’t listed, please contact us at info@reformparty.org. If you would like to donate to the party, it is possible to do so at www.reformparty.org/contribute. 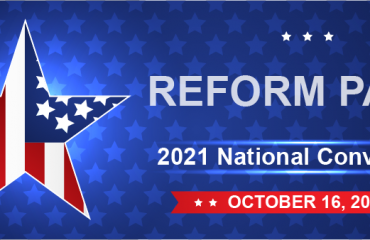