A conflict has been brewing between one of Nevada’s most powerful labor unions and the Sanders campaign (indeed, the whole Medicare for All / M4A movement).

For months tension had been building. But recently, the tension hit hard as Nevada’s Culinary Union 226, which represents hospitality workers in Nevada, openly circulated a flyer speaking against Democratic Socialist candidate for President, Bernie Sanders, and his support for a “single payer” or Medicare for All plan.

Culinary Union 226 opposes the plan, because it will strip its members of healthcare benefits they all enjoy and negotiated for. The flyer (click here for the story) supports the health care plans of former Vice President Joe Biden, former Mayor Pete Buttigieg of South Bend, Ind., Sen. Amy Klobuchar of Minnesota and the billionaire businessman Tom Steyer.

Following release of the flyer, the Union says that the Sanders campaign and its supporters have verbally attacked the union for its position.

In a response to the disagreement, Rolando Jackson of Current Affairs (see Why Would A Union Oppose Medicare For All?) openly wonders why any union would be opposed to Medicare for All.

In many ways, this article is fascinating because it brings attention to the blind obedience to the theory that M4A is somehow this magic bean that once planted will grow into this incredible thing that will solve all our healthcare problems.

But I will focus on the underlying premise of the article, which is: Unions need to prioritize the interests of those outside of their membership, and advocate for and support M4A because that is the only solution to provide healthcare for everyone.

Both arguments are logical fallacies.

First, the whole point of a union is to advocate for the best interests of its members. The very definition of a union is that it is a group “formed by people with a common interest or purpose.” If unions put the interests of all others above their membership, then why even have a union in the first place? It is counter-intuitive, and counter-productive. What the author and backers of M4A want is a loyalty pledge to the M4A policy and obedience to the cause and its leaders. How very… Trumpian.

Second, the idea that M4A is the only solution is absurd. For starters, M4A does not exist in any other country (and no other country in human history has done what M4A would require us to do). Every country has a different plan – all functioning with pros and cons. There may be some similarities (eg, Canada), but to say that “single payer” or M4A is the only solution to fixing healthcare and people need to get behind it or else is just the sort of rhetorical nonsense and dictatorial attitude that people abhor.

It also, incidentally, is the point of the Culinary Union makes in its opposition – we have our opinions – stop telling us we cannot advocate for what we want.

In fact, what this whole debate shows is something no one in the media is talking about and that is: who is hearing the people and who is listening to the people?

“Hearing” is just awareness of sound, whereas “listening” is dedicated attention to sound. I define the two, because politicians often “hear” what voters are saying, and play to the sounds and the words. But the real difference-makers in an election are the ones who listen OR perhaps more accurately – the one voters think are listening. No one wants to feel like a politician is just playing lip-service to their concerns. They want someone who listens to them and takes their concerns to heart. That’s why “I feel your pain” aka Bill Clinton was so effective.

To that end, what I see here is less about M4A and more about the candidates themselves.

Sanders is the “my way or the highway” candidate. He, AOC and others are not interested in compromise. But they also turn-off large numbers of voters because they don’t listen or respect others. In the case of some factions of the so-called “progressive” coalition, or the more accurately named “Urban Socialists” who want to take over the Democratic Party, demonizing those who disagree (dismiss, demean, destroy) is standard operating procedure.

Warren does not believe in compromise either, but understands she needs to appear like she can to win votes. She “hears” what voters are saying, and hence is not talking about M4A or her plan. However, this does not help her. One of her greatest problems is her honesty and candor. People know what she really wants, so simply masking it or hiding it for the time being does not help improve the perception she is deceptive and unauthentic candidate – it only backs-up the reasons why people don’t like her.

Buttigieg appears to be listening to the voters, and offering a compromise – expanding Medicare for those who need it and want, while allowing others to continue in their plans. I do not know enough about him to determine if he is telling the truth about what he believes. But the underlying pragmatism of his words could help him to earn voter support.

How this plays out in the days ahead, and in the final voting in the Nevada Democratic Party Primary, will be interesting to see.

NOTE: In an earlier version of this article I referred to the attitude conveyed by the author of the Current Affairs article and others that M4A was the only acceptable option and that no compromise was acceptable as “rhetorical nonsense” and the kind of “Brown Shirt thuggery that people abhor.” I should have used a better choice of words, and have replaced that portion of the sentence with “dictatorial attitude that people abhor.” The original word-choice was to illustrate the extremism that people are seeing of policy advocates that see no other option and see no need to respect or coexist with others who disagree with them. However, after a person commented in objection to those words, I realize I should have used a better choice of words. Hence, I have made the change and noted such here.

Michael Hackmer is Chairman of the Reform Party of Virginia. He can be reached at email at: michaelhackmer@reformparty.org 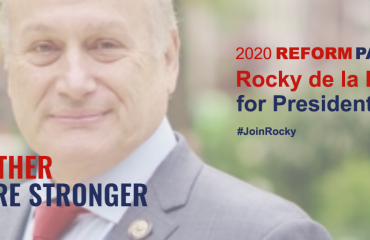